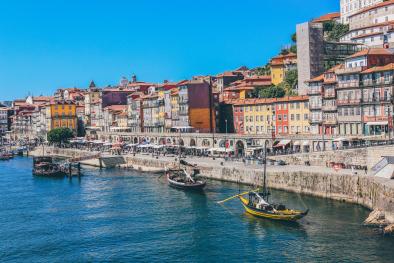 The European Optical Society Annual Meeting, EOSAM, is a major international scientific conference covering all aspects of optics and photonics that are presented in topical meetings and special sessions. This year, EOSAM 2022 took place in Portugal, at the Faculty of Engineering of the University of Porto, FEUP, in close collaboration with the Portuguese Society for Research and Development in Optics and Photonics, SPOF, and INESC TEC - Institute for Systems and Computer Engineering, Technology and Science. EOS also collaborated with Sedoptica, PhotonicsFinland, Promoptica, and the European Photonics Industry Consortium, EPIC for the event.

The conference was chaired by Manuel Filipe Costa, President of SPOF, and Maite Flores-Arias, Secretary of EOS as General chairs; Orlando Frazao and Susana Novais, INESC-tec as Local Chairs; and Patricia Segonds, President-Elect of EOS and Gilles Pauliat, President of EOS as Program Chairs. The EOS Office coordinated and handled the organization led by the Executive Director, Elina Koistinen, together with Conference Manager Jussi Ahonen and Conference Assistant Tiina Romppanen.

TOM13: Advances and Applications of Optics and Photonics

An exhibition and an industrial optics podium session

360 attendees enjoyed the over 300 presentations during the week at the fully onsite meeting.

EOS once again provided tutorials on the topical meeting topics on Monday 12 September. This year there were nine. They were provided as an additional program, free of charge to all the EOSAM attendees. The tutorials were provided for the first time in 2014 and after a very successful start they have been included in the program ever since and have proved to be highly popular. Up to 140 attendees attended the parallel tutorials this year. 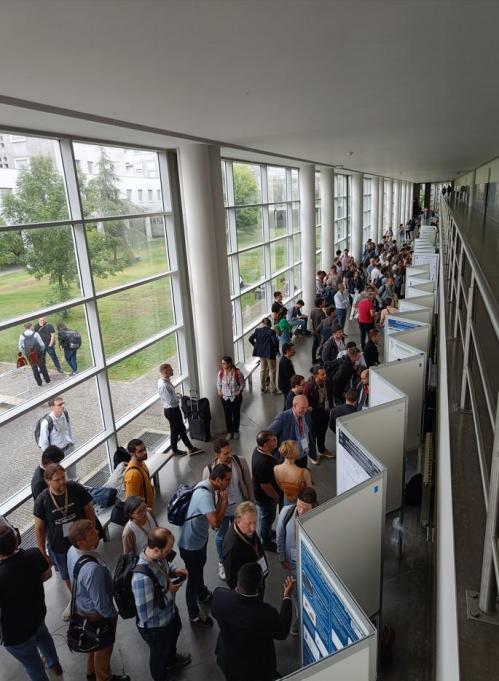 The Early Stage Researcher Session is specially designed for participants in the first four years (full-time equivalent research experience) of their research careers and who have not been awarded a doctoral degree. PhD students were encouraged to express their ideas and describe their scientific achievements to the conference audience. This year they were invited among those presenting a poster, and six students made very high-level presentations. The audience included mainly students but also older researchers.

Posters were presented at two sessions during the week with a lot of interest and lively conversations around the poster area.

Along the week there was a fantastic array of six plenary speakers on various topics, proposed and invited by Topical Meeting chairs:

Arno Rauschenbeutel: Seeing A Single Atom Where It Is Not

Silvia Vignolini: Light management for control of visual appearance, from nature to applications

During the week a two-day exhibition was held with Sphere, Thorlabs, Toptica, GloPhotonics , JEOS:RP and EDP Sciences, with a great buzzing at the booths all week.

On Tuesday, an industrial optics podium session was held for the first time in co-operation with the European Optical Society, EOS, and the European Photonics Industry Consortium, EPIC. Challenges and solutions from companies were highlighted to researchers by Thorlabs, Toptica, Sphere, and GLOPhotonics. Afterwards, a very nice networking reception was enjoyed by all with live music from the faculty TUNA group, together with drinks and snacks. 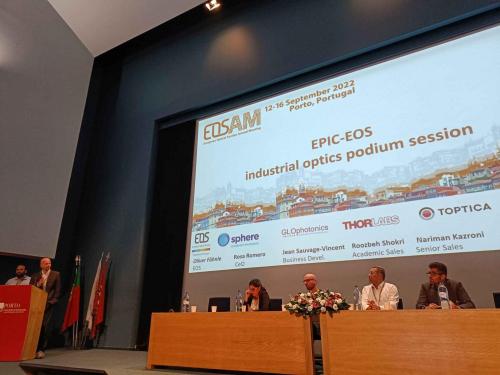 The EOS Prize was given out to the best paper published in the Journal of the European Optical Society, JEOS:RP for the paper “Round robin comparison study on the form measurement of optical freeform surfaces."  Journal of the European Optical Society-Rapid Publications 16.1 (2020): 1-15, by Ines Fortmeier, Reyko Schachtschneider, Vit Ledl, Ondrej Matousek, Jens Siepmann, Antonia Harsch, Rolf Beisswanger, Youichi Bitou, Yohan Kondo, Michael Schulz and Clemens Elster. The   purpose   of   the   prize is to encourage a European dimension  in  research  in  pure  or  applied optics. The prize is awarded to the authors of a research paper  in  the  field  of  any  branch  of  optics, published in the JEOS:RP, and includes a diploma and an honorarium of 1000 EUR.

The EOS Annual General Assembly (AGA) was held on Thursday 15 September onsite and online for all EOS members with a report on EOS budget and past and planned activities. The EOS Membership voted to award the first-ever EOS Honorary Member status to Hervé C. Lefèvre for his noteworthy scientific contribution (gyro lasers), impressive industrial career, ​and essential dedication to the photonics community​. Herve will receive his Honorary member trophy at the celebrations during EOSAM 2023.

Three new elected EOS Fellows were announced during the AGA :

Roberta Ramponi for her contributions to nonlinear and quantum optics and her leadership within the Optics and Photonics community,

Alberto Diaspro for the realization and utilization of confocal and two-photon fluorescence microscopy as instrumentation for investigating biophysical phenomena,

Goery Genty for his achievements in ultrafast photonics and remarkable experiments on nonlinear phenomena in optical systems. 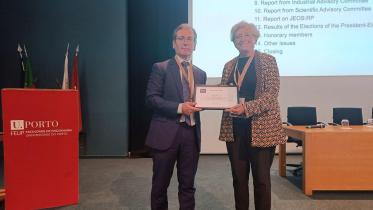 EOS Executive Committee and Board of Directors

EOS, as any society, relies on active people motivated to work on the common good for the community, to make a difference and bring motions forward. Within the more than 4000 individual and institutional EOS members, there is in fact a big team behind the society as the driving force.

The EOS Executive Committee and Board of Directors, together with the Executive Director and the EOS office staff, are in the core of developing the society and pushing towards the common goals.

The newly elected EOS Executive Committee (Execom) started their work during EOSAM and continue the committed work of the previous Execom team. The new Execom:

María Teresa Flores-Arias, Secretary to the Board

Patricia Segonds started her two-year-position as the EOS President during the General Assembly on 15 September. Behind her the Execom team and other Board members present at AGA onsite.

Throughout the week we got to hear some amazing student presentations and the best were awarded at the end of the conference, all including a diploma and honorarium of 500 EUR, awarded by the Award Committee Chair, Roelene Botha:

Tomas Fordey for their poster in TOM10: Frontiers in Optical Metrology on Retardance measurement by spatially probing the sample with optical vortices, sponsored by EOS

Giel Keijsers for their talk in TOM8: Nonlinear and Quantum Optics on Superfluid light through dissipation, sponsored by RhySearch

Shahrzad Khajavi for their talk in TOM1: Silicon Photonics and Guided-Wave Optics on Highly-efficient and compact metamaterial surface grating antenna on a 300-nm silicon-on-insulator platform, award sponsored by Evatec

Duarte Silva for their talk in TOM13: Advances and Applications of Optics and Photonics on Unravelling an optical extreme learning machine, sponsored by Bühler

Congratulations to all the prize winners!

Great platform to connect and catch up

EOSAM is of course not complete without a lot of networking opportunities. They were especially  provided by the welcome reception and all coffee breaks, lunches and the conference dinner, all included inside the conference ticket fee. The conference dinner was held in the magnificent Mosteiro São Bento da Vitória with a rich history and amazing local delicacies. In addition to reserving enough time for connecting, the EOSAM mobile application allowed people to check the list of people present, send messages to each other to easily arrange meetings onsite, and manage their individual schedule during the week marking up all talks and events not to miss anything! The networking started before the event, and can continue even after the conference. The handy app, already familiar from the past EOSAM in Rome, will be kept as an integral part of the EOSAM experience, developing further the connecting options and facilitating meetings onsite.

Conference Proceedings will once again be available after the conference online as open access. Link to proceedings will be provided at https://www.europeanoptics.org/pages/publications/proceedings.html.

Thank you for the once again amazing EOSAM experience!

A great thank you to all the attendees, speakers, sponsors, chairs, program committees and partners. And a special thank you to the local organizer and the students for making sure everything worked smoothly during the week!

EOSAM is the flagship event of the European Optical Society, EOS, where the latest results in optics and photonics research are presented. The meeting venue changes annually.

Next year we look forward to seeing everyone at EOSAM 2023 in Dijon, France 11-15 September. For more information about the organization of this next meeting, keep an eye on the website for further announcements very soon: https://www.europeanoptics.org/events/eos/eosam2023.html

Do not miss our newletters sent by email and register to our social media on LinkedIn: https://www.linkedin.com/company/eos-european-optical-society/, and follow @EOS_AM on Twitter.