The history of the EOS Prize

Thanks to Pierre Zaleski, the former administrator of Europtica Services IC (ESIC), EOS has received a donation from the capital remaining after the dissolution of ESIC. According to the wishes expressed by ESIC, this donation will be managed in such a way as to generate revenue to be used for an EOS prize to promote OPTICS in the widest form in Europe. Further details of the rules and condition are given ici. Download the list of

In 2016, the JEOS:RP paper on: "Effect of surface roughness on optical heating of metals” (published 2014) was awarded the EOS Prize at the Annual General Assembly 2016 in Adlershof, Berlin (DE).

In 2012, the JEOS:RP paper on "Low cost production of computer-generated holograms: from design to optical evaluation” was awarded the EOS Prize at the Annual General Assembly 2012 in Aberdeen, Scotland (UK). 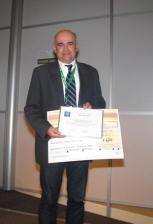